"In the business world, the rearview mirror is always clearer than the windshield." - Warren Buffet

Unprecedented Federal Reserve actions, lackluster stimulus, controversial bailouts, evil stock buybacks, helicopter cash (?) and (mild?) recessions...what does it all mean?  Headlines are going to be saturated with these terms for the near-future.  I thought I would take some time and attempt to translate some of these topics.

First let's start with the Federal Reserve a.k.a. the Fed.

What is the Federal Reserve?

The Fed is the central bank of the United States and they conduct the nation's monetary policy.  They are also the primary regulator of the banking system.   I will dive into the inner workings of the Fed at another time but for now think of them like banking's handyman.  They keep everything running behind the scenes.

The Fed has a tremendous set of tools but the one you can likely relate to is interest rates.  Interest rates for mortgages, bank accounts, student loans, and so forth are all influenced by the Fed.  While they do not control interest rates directly (the free market does that) they have influence over rates via their toolbox.

What did the Fed do recently?

Last Sunday the Fed lowered the Federal Funds rate to 0%-0.25%.  What does that mean?  Don't expect to earn much on your bank CD's for the foreseeable future!

What does lowering interest rates do?

Lowering interest rates keeps money flowing.  It's removing clogs in the financial drain.  If you were on the fence about purchasing a new home perhaps a cheaper mortgage can change your mind?

Are credit markets "seizing up?"

In the media you will often see Wall Street nerds discuss credit markets "seizing up."  What does that mean?

Here's a real-world example: imagine you are a small local restaurant and few customers are coming in due to coronavirus.  You didn't do anything wrong; you weren't irresponsible with your cash flow and you didn't cause the coronavirus.  You do not want to lay off your staff but each passing day your stash of cash dwindles further.  When cash runs out you will have to lay off workers or close up shop completely to save your family's finances.

What do you do if you are a small business owner?  One option is to go to the bank for a bridge-loan of more cash.  If the bank says "sorry, too risky" that is a credit market seizing up.  Seizing up is not getting access to lending precisely when you need it most.

The Fed uses their toolbox to help prevent that from happening.  They encourage money flowing through the banking system.  If the bank is worried about borrowers defaulting the Fed can step in and help out.  This can go a long way towards discouraging ripple effects through the economy.

Is the Fed out of ammo?

No. The Fed is like your father-in-law...there is always another tool in the garage and the knowledge to use it.  This is a recurring talking point from pundits & politicians when they run out of others to blame.  They weren't out of ammo in 2009, 2011, 2013, 2016 and they aren't out of ammo today.

What are examples of stimulus?

Stimulus can range from tax-cuts to corporate bailouts to literally just writing checks to everyone (also known as helicopter money). 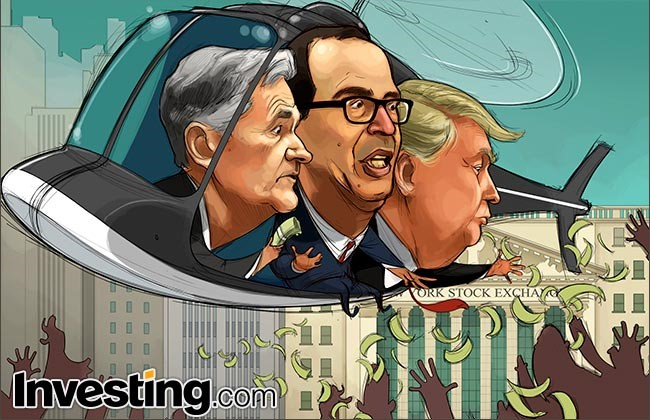 Helicopter money will surely be a topic drawing out lots of political debate.  It sounds crazy but it actually happens more often than you'd think. Most recently President Bush deployed helicopter money as part of the stimulus response to the 2008 financial crisis.

Why so much politics when discussing stimulus?

Can we afford stimulus?

That is far out of my wheelhouse and veering into politics. Have we run big deficits in the past and have they worked? Yes and yes.  Below you can see our nation's budget deficit as a percentage of GDP (how much we spend relative to our paycheck per se).  We've run deficits MUCH larger than our current one - notably 2008-2009 and WWII.

Will stimulus end the bear market in stocks?

Nobody knows when the bear market will end.  Historically stimulus bares its fruit after the economy starts to reopen and life begins returning to normal.  It tends to supercharge the recovery.  With that said a larger-than-expected stimulus package could help boost short-term sentiment in the markets.  Stimulus itself won't create the next bull-market but in my opinion it's a reason to suspect the next one could be powerful.

Will there be corporate bailouts?

I'd say it's likely.  Many industries such as airlines are in a serious short-term cash-flow crunch from COVID-19.

It's impossible to say. Pundits & politicians will undoubtedly have a field-day arguing the merits and moral hazards of bailouts.  No matter how persuasive an argument is you never truly know how it would have played out differently.  That is what makes history interesting and leadership hard.

Here's what I know with absolute certainty: no one will be fully satisfied with the outcome and we will debate it for a long time

An interesting side note: the bank and auto bailouts of 2008-2009 were profitable to taxpayers.

What are stock buybacks and why is everyone up-in-arms over them?

Stock buybacks are when a publicly-traded company buys their own stock from the stock market.  It is one way a public company can reward the owners.

If you are a CEO of a major publicly traded corporation you are tasked with directing how the company spends its excess cash.  You have five options:

That's it.  Those are your five levers as a CEO and you get paid really well to choose between #1-5.

Why wouldn't you just choose #1?  Not all businesses can.  If you are a large provider of self-storage units would spending billions on research and development be productive?  Would those billions invent a revolutionary new type of garage?  Probably not.

Could you buy another company?  Sure - if the price is right AND regulators don't think you're forming a monopoly.  There goes #2.

What if you have no debt, or the debt is generationally cheap due to low interest rates?  Cross #3 off the list.

That leaves options #4 and #5: pay a dividend or buy back stock.  Dividends are taxable and sometimes shareholders don't want the cash.  That leaves buying back stock.  Many times as a CEO it can make sense to simply pay the owners of the company.

I suspect buybacks will be a political hot-topic for the foreseeable future.  Politicians will rush to assign the winners-and-losers of the coronavirus stimulus package.  I don't have much of an opinion on buybacks but I do think business decisions look easy with hindsight.  Real-time?  Business and leadership is much harder.

What is a recession?

A recession is defined as two consecutive quarters of negative GDP (gross domestic product).  GDP is like the speedometer of a nation's economy.  When GDP is rising the economy is growing and vice-versa.

Are we in a recession?

I believe so, yes.

No one can say for certain but I feel that COVID-19 will prove to be a short-term event and not a long-term impact to the economy.

Vanguard characterizes their economic forecast as "a sharp, but short contraction."  I agree with their economists. 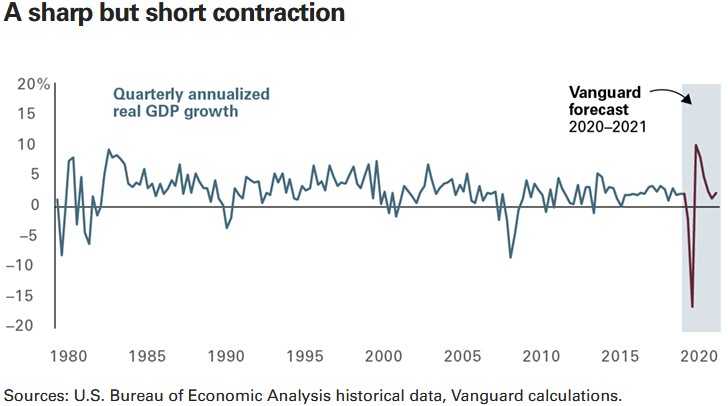 What does a recession mean for investors?

It's...complicated.  The stock market is not the economy.  I will have another piece dedicated to this topic in the future.  Recessions come in all shapes and sizes and are an economic event that is felt in jobs, spending, and personal finances.  Oftentimes stock markets lead the economy because stocks are inherently forward-looking.  Post-2008 the markets were well on their way towards a recovery by the time the recession was declared over.

For investors it is often best to simply have a portfolio and financial plan that expects recessions and bear markets.