As anticipated the latest round of tariffs appear to be political brinkmanship.  Politics and investing still don’t mix well.

Without trade drama we need a new topic to digest…today the yield on the 10 year U.S. Treasury Note fell below the yield on the 2-year note.  This is called a yield-curve inversion and the media is going to clamor over it in the following weeks.  The yield curve topic has come up several times over the past few years but why is it a hot topic?  Because post-WWII yield-curve inversions have preceded seven of the last nine recessions.

I’d like to take some time to explore the yield curve and some reasons why it may, or may not be, an effective indicator this time around.

Disclaimer:  This is an extremely boring topic.  As a result I am going to provide a quick summary before diving into the data.

I am skeptical that a yield-curve inversion is an effective indicator for investors in the current interest rate environment.  Low interest-rates and quantitative easing have created a vastly different environment compared to prior inversions.

But what if it IS signaling a recession?  On average it takes 22 months for a recession to land after an inversion and stocks rally 15% on average in the meantime.  A yield-curve inversion alone likely isn’t a cause for change in long-term investor portfolios.  The data surrounding inversions is not as interesting as the media will make it out to be in the coming days.

What is the yield curve?

Below is what a “normal” yield curve looks like:

The red line is the cost of lending money.  Typically the longer you lend out your money the more you earn in return.  The blue line below is the yield curve at the end of July. 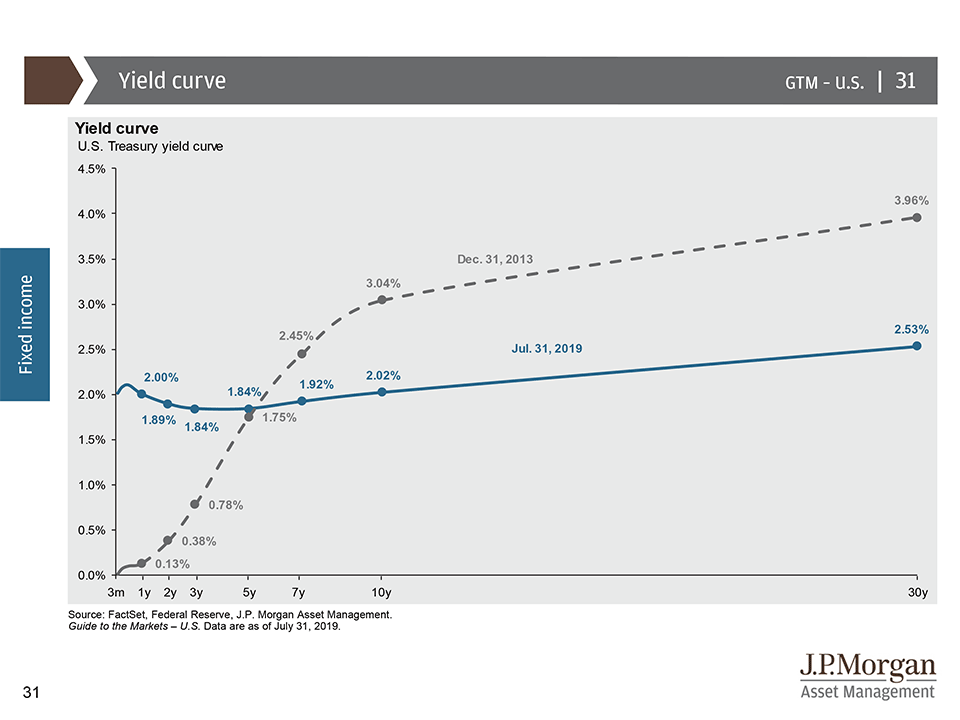 As you can see it is flat.  Historically the shape of this curve has been used as a leading-indicator for the health of the economy.

Why does the yield curve matter?

What do you think Devan?

I am skeptical of its effectiveness for a number of reasons.  My chief skepticism is that the post-2008 financial crisis world is vastly different than the pre-2008 world.  While an inversion may have been accurate in the past it may no longer be so reliable.

In the aftermath of the 2008 financial crisis central banks around the world lowered interest rates to zero, and even below zero in some cases, to fight the severity of the Great Recession.  This was effective but economies have since struggled to return to “normal” interest rates.  Anyone who has purchased a CD from the bank over the last decade can see the impact.

This begs the question: If we aren’t in a “normal” interest rate environment will an inversion still be an effective indicator?

The table below illustrates my point, courtesy of Charlie Bilello at Pension Partners: 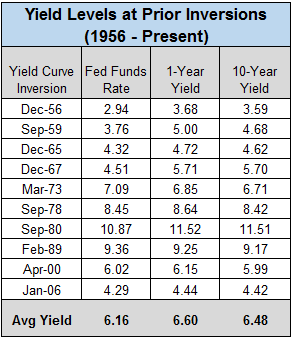 The 10-year yield averaged 6.48% in prior inversions.  That is vastly different than the 1.623% we saw this morning.  My concern with the current inversion argument is that the environments are now considerably different – it is difficult to make an apples-to-apples comparison with past inversions.  An inversion when rates are at 6% could be more dramatic than inverting at 1.623%.

In a great piece by analysts at Wells Fargo they note that the 10-year yield may be 0.25-0.50% lower than it otherwise would be due to quantitative easing from the Federal Reserve.  This further supports the idea that the environment is different now.

In addition the yield-curve must stay inverted to be reliable.  Only time will tell if that is the case.

My Thoughts for Investors

While the yield-curve inversion is an interesting piece of market generated information it should be taken alongside a broader context.  The underlying fundamentals of the economy appear sound, financial conditions are not overly restrictive, and the consumer's financial life continues to improve.  In my view the global economy is faring better than many appreciate.

Are we going to enter a recession?  Yes we will at some point.  When? It is impossible to know.  Rather than focusing on cherry picked pieces of data the media highlights, focus instead on if your portfolio is prepared for the inevitable recession.  The most prudent thing an investor can do right now is review the risk in their portfolio and ensure it is aligned with their long-term goals.  If you don't know how much risk you are taking in your portfolio contact me.

Nobel Laureate Gene Fama & Kenneth French recently studied whether yield curve inversions could help investors avoid poor stock returns - they found no evidence of that.  At the end of the day this inversion may be simply another notch in the market's "wall of worry."

P.S. If everyone on Wall Street believes an indicator is rock solid, it probably isn't.  Investing simply isn't that easy.