"American-dynamism overwhelms everything else." -Warren Buffett

I am incredibly bullish on America.  You might have picked up on that theme.  Sticking with investing language: America is a tremendous value-stock that will compound far into our future.

Those who know me personally know I am kind-of a presidency nerd.  I love studying the presidency (my poor wife).  I'm fascinated by the job.  I love the history, the characters, the high-stakes, and the gamesmanship of the role.  A few of you have asked for my thoughts on the election and it's impact on portfolios.  It's a great question and deserves thought.

I'll start with the answer: Devan, does the election have an impact on my portfolio?  No.  My investment views won't change under President Trump or President-elect Biden.  They wouldn't have changed under President Clinton, Sanders, Cruz, or Romney either.  I'm bullish on American business.

Do I have a preference on who wins the election?  Of course I do.  I'm no different than anyone else.  There are leadership-qualities and character-traits I seek when hiring the President.  With that said, my White House preferences don't impact my investing viewpoints very much.

Great investing requires detachment; the skill of "zooming-out" to see the larger picture.  Detachment is useful in investing, business, and life.  I have always found when the world gets weird it's useful to "zoom-out."

My personal decision making always improves when I take a step back and read the field.  When investing, detachment can pay major dividends.

I'm bullish on the American economy.  Why?  Let's detach and zoom-out:

Amazingly, every President from Truman-onward has left the oval-office with GDP higher than they started with.  This even holds true for the shortened terms of JFK & Nixon.  Over those 71 years GDP grew from $0.2 trillion to $19.5 trillion, a 97-fold increase, or 6%+ compounded over time.  It's a remarkable record.

Why does America work so well?  Buffett calls it American-dynamism.  Combine abundant natural resources with an economic system that rewards creativity and risk-taking and you get American-dynamism.  It's a force that overwhelms any single politician, party, or policy.

Here's an example from Berkshire-Hathaway's 2015 letter to shareholders (paraphrased):

That productivity gain was immensely beneficial to the overall nation.  Many of those farm workers, while disrupted, were also now mobilized.  They were free to find new work, pursue higher-education, start businesses, move to cities, etc.  That is American-dynamism in a nutshell.  The ability of the nation to adapt quickly to a changing world.  It can be harsh in the near-term, especially on those disrupted, but the nation undoubtedly benefits over the long-haul.  It unleashes creative potential.

It's always been a tough bet to short the great-American economic engine.  I suspect that isn't going to change anytime soon.

But what about the stock market?  I'm bullish on American business.  Why?  Let's detach and zoom-out:


Past performance may not be indicative of future results. Indexes are not available for direct investment.

The stock market tends to do well regardless of the oval office.  What about congress?  Ned Davis research crunched the numbers for us: 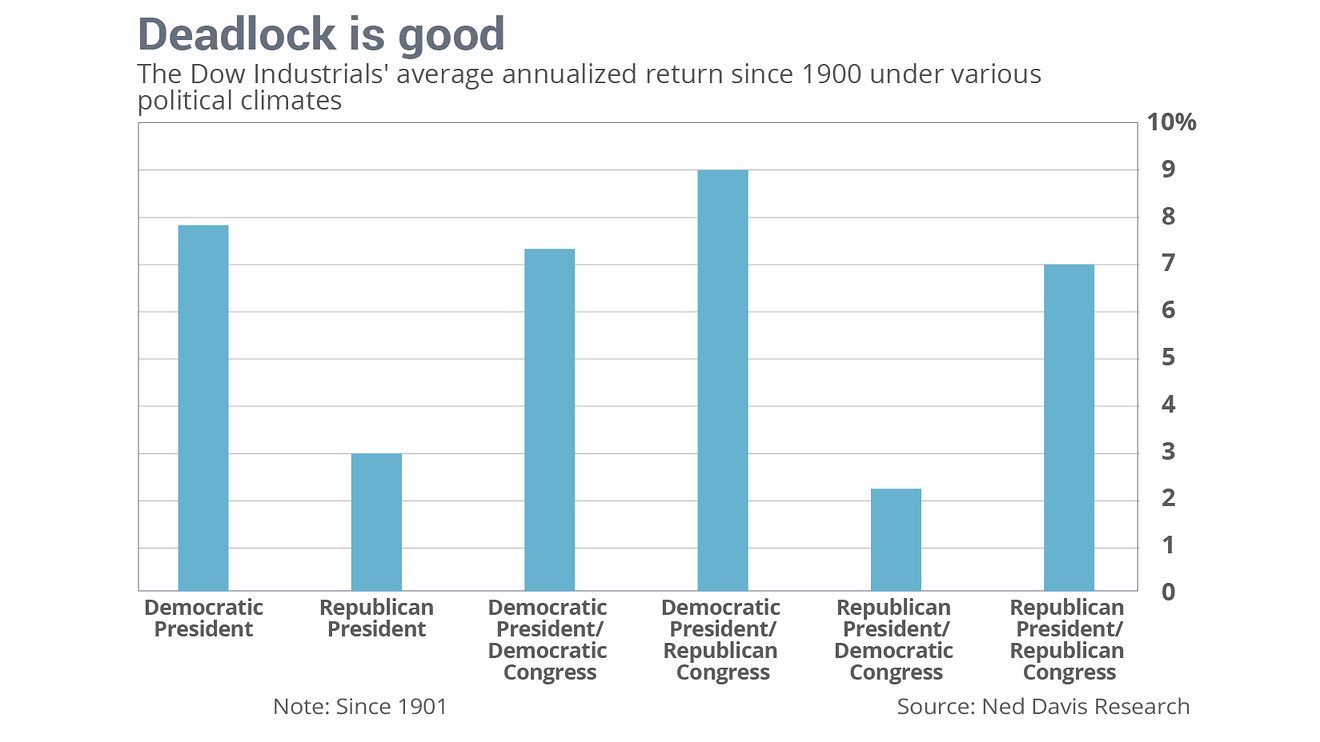 A few of my personal takeaways from this data:

The same economic lesson rings true for markets: the stock-market isn't too concerned with Washington. 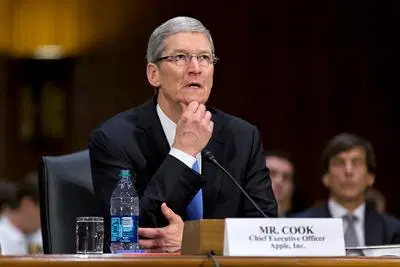 "Why do these guys keep bothering me?"

If you are Tim Cook, CEO of Apple, you have a lot of questions on your mind:

These are all important questions for Tim's boardroom.

How high does the White House rank in Tim's mind?  I am sure it's there somewhere but I don't think it's near the top.

It's easy to forget what the stock-market is: thousands of individual-businesses facing these challenges.

That isn't to say a President has no impact on markets.  Presidents certainly can and do move markets: 2018's trade-war bear market, invading Iraq, etc.  Presidential actions are one of many factors impacting the value of businesses.  Interest rates, oil prices, technology, competition, currency fluctuations, etc. are just as important.

Every election season brings out politically-themed trades.  Next week there will undoubtedly be articles promoting slam-dunk "Trump-trades" or "Biden-trades."  They can be notoriously hard to pull off because markets are efficient.

A popular Trump-trade in 2016 was coal.  President Trump campaigned on ending the war on coal and rescuing the industry.  Major coal-companies are down nearly 30% since Trump's election.

To be clear, I don't think this was a failure of policy.  Coal is simply less efficient than natural gas.  That's it.  Capitalism is brutal.  Competition eats away, and destroys, uncompetitive businesses.  For coal, fracking is a much larger issue than any policy.  In an economy as large as ours it is tough, if not impossible, for government to change secular economic trends.

Steel was another popular theme-trade at the start of the 2018 US-China Trade War.  U.S. Steel had a brief surge in price as the trade-war began before subsequently falling 75%. 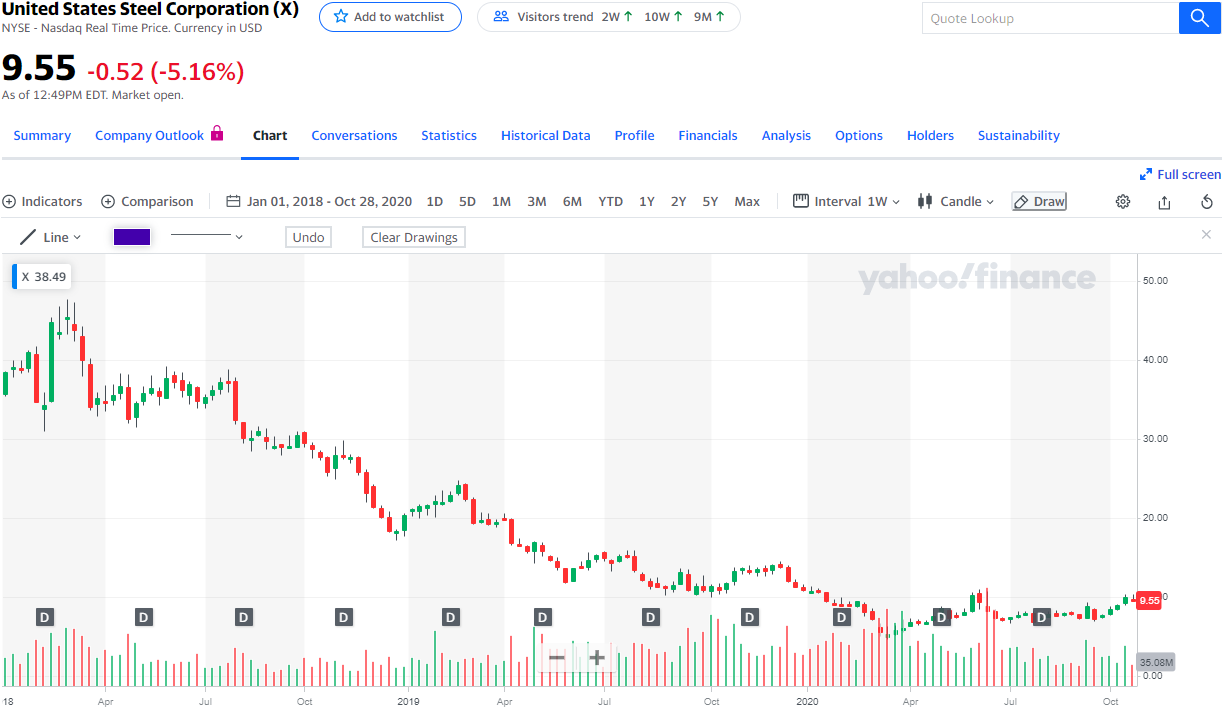 This cycle repeats itself every election.  Green energy for Obama, financials for Romney, etc.

Imagine a stock-picking contest: what companies would thrive under a Trump administration?  Would you have picked a California electric-car manufacturer led by a socialist?   Tesla wouldn't have been my guess.  The future is hard to predict because the world is complex.

This isn't to say theme-trades are always wrong, they can certainly work well.  My advice is to know why you own something and do your homework.  If an investment seems like easy money, it's probably not.

Don't mix politics and investing.  That's my advice for investors.  Same as it was in 2016 and same as it will be in 2024.  Politics is an emotional sport and emotions kill investment returns.  Politicians aren't the driver of the economy or markets.

Politics is seductive because we're offered simple solutions for a complicated world.  Soundbites rule the day in a nation much too big for soundbites.  If the Resolute-desk had a magical GDP-boosting lever every President would pull-it.  That I am certain of.  Unfortunately the world simply isn't simple.

I'll end with the most bullish chart I've ever seen: the Census Bureau's new quarterly read on business applications: 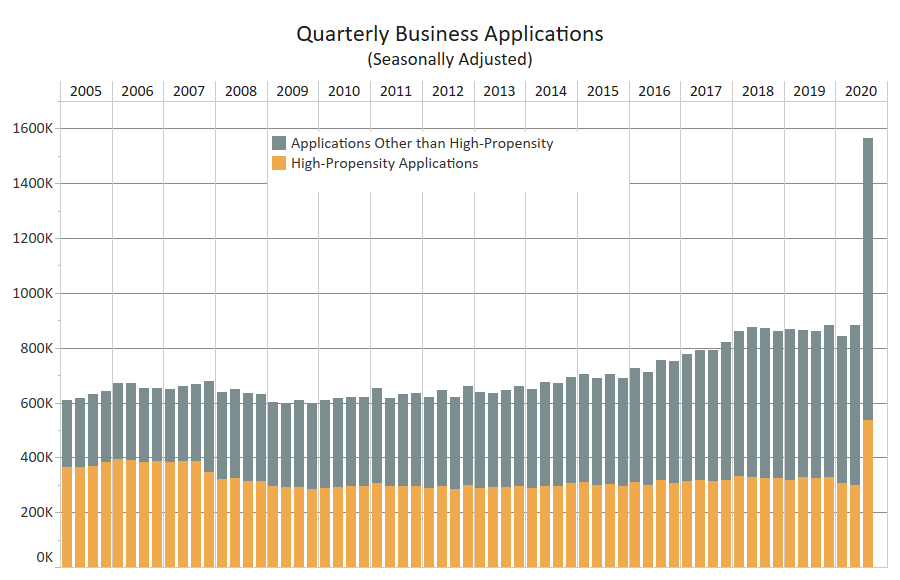 American-dynamism in action.  Necessity is the mother of invention?

Thanks for reading and don't forget to vote! 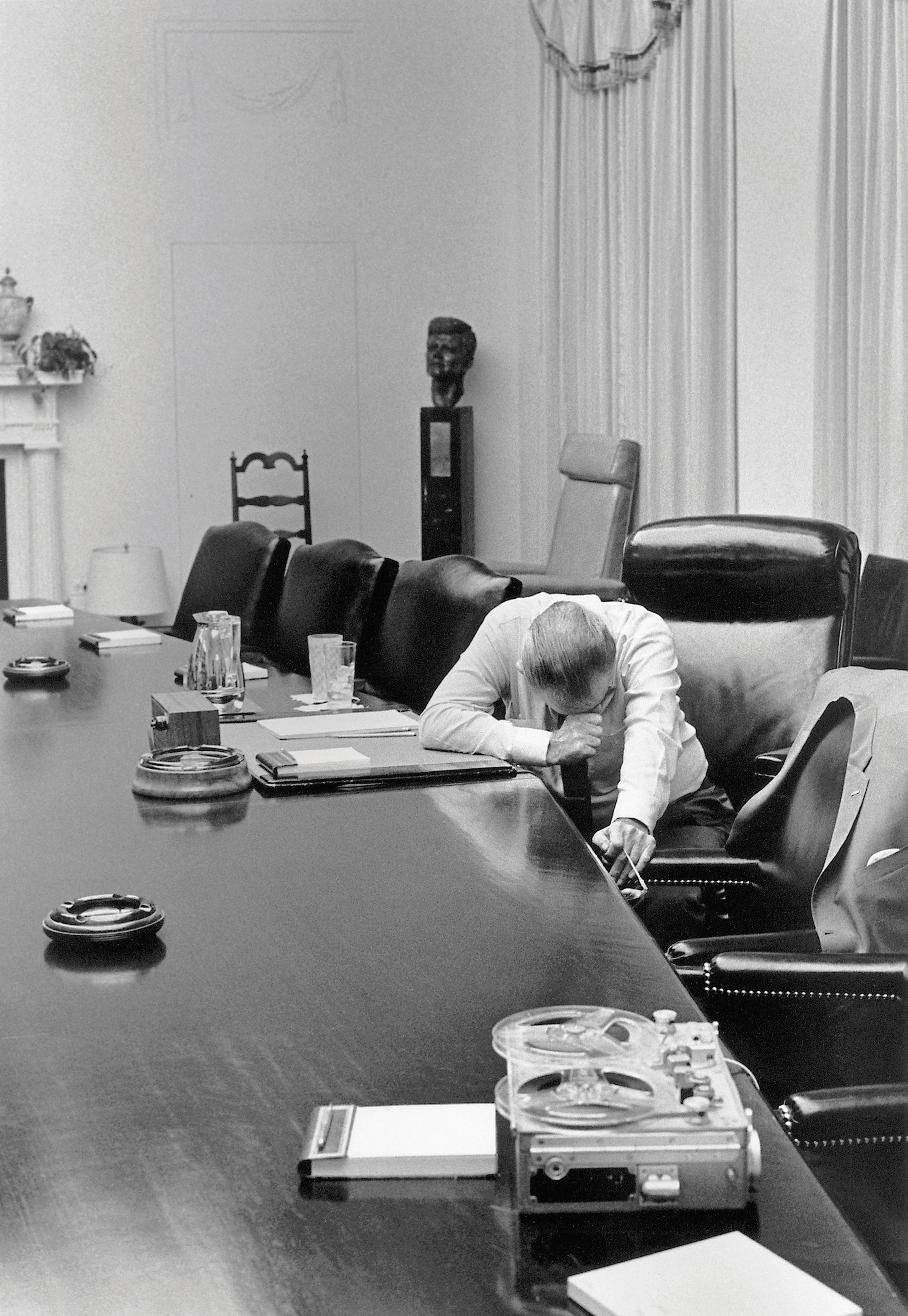 I always felt this photo was emblematic of the Presidency.