"I don't believe you could have had a better Treasury Secretary than Hank Paulson." - Warren Buffett

The dichotomy of markets

Both are true.  Another classic case of two opposing ideas being true at once.

The S&P 500 has been rallying.  Half of the initial bear market decline has been clawed back by the bulls to the surprise of many. 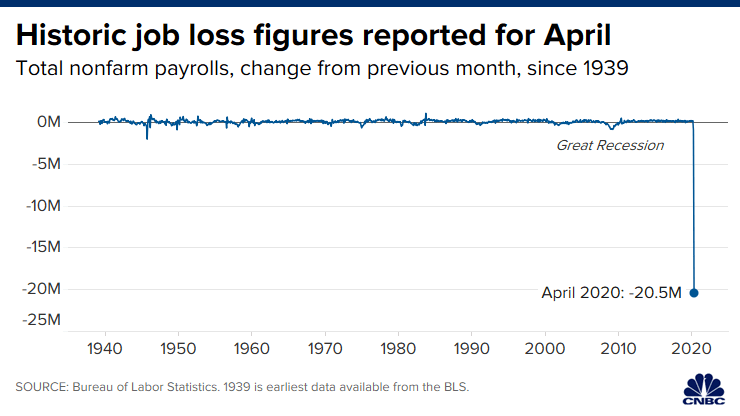 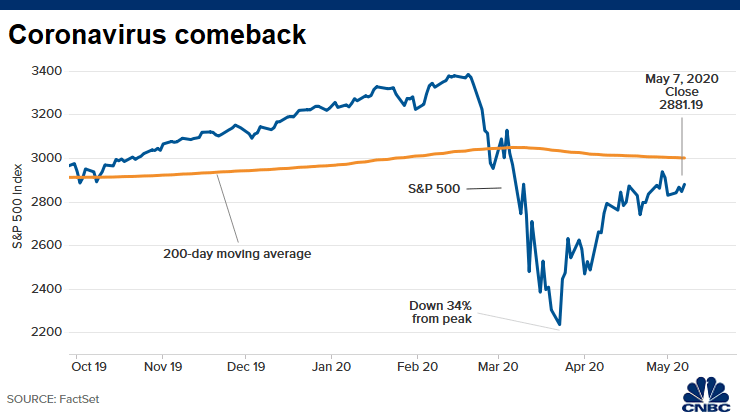 Source: CNBC. Past performance may not be indicative of future results. Indexes are not available for direct investment.

Why are stocks rallying when the economy is in shambles?  This question highlights the difference between stocks and the economy.

Stocks are forward-looking and economic data is backward-looking.  This can be a tough concept for investors to internalize.  As participants our viewpoint is often the world we see around us.  We see the closed stores, we see friends out of work, we see the economic data and the heartbreaking headlines.  While we see that world in front of us stock prices hunt for what happens next.  Economic data, like the payroll numbers above, are simply confirming what we see outside.  Economic data is the rearview mirror and stocks are the horizon.

Markets often begin to recover well before economic data recovers.  This happened in the 2008-09 recession.  Markets started climbing ahead of economic data improving.  This is part of what makes timing the market in the near-term tough.  Market timing always looks easy with hindsight.  Flash back to mid-March: stocks are down 30% and the COVID-19 wave had barely even begun.  If you wait until it "feels better" to invest you are often behind.

I should be clear: this does NOT mean we are out of the woods.  Stocks could absolutely go lower again and it wouldn't be unheard of.  I just wanted to touch on this dichotomy of markets.  Stocks and economic data don't always see eye-to-eye.

So why are stocks rising?

It's impossible to say what is driving markets but I suspect two themes are at play: seeing a light at the end of the tunnel and our country's ability to learn from mistakes.

The light at the end of the tunnel

As everyone knows there is plenty of heated debate from experts on COVID-19.  Will there be a second wave?  Will there be a vaccine?  Is X treatment effective?  Should we reopen the economy?  Leadership is hard.

Despite debate there is one item experts do agree on.  Experts don't know when COVID-19 ends but all agree that it will end.  Just like SARS, bird flu, measles, polio and so forth science will tackle COVID-19.  That fact isn't being debated; science is really good at killing viruses.

Economists and market pundits argue over the economic ramifications but all agree the economy will persist.  I still need a new iPhone and my son still wants his Happy Meals.  As I have said before this is the beginning of something new and not the end of anything.

No one knows for sure (that's what makes a market) but stock prices might be sniffing out some sort of recovery ahead.

Learning from our mistakes

In a previous post I discussed how the United States is an adaptable system.  It was designed this way. 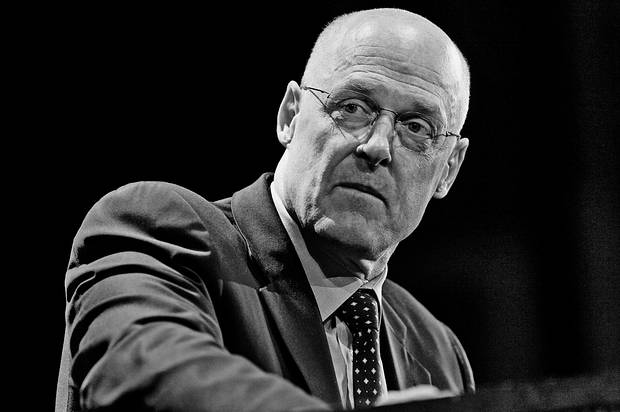 It is a cliché that picking a great cabinet is a hallmark of a great President.  Hank is a textbook example of this.  Hank's biggest strength was that he was a markets guy (which was controversial at the time).  As the CEO of Goldman Sachs he knew the business of markets better than most.  In 2008 the markets were in crisis and through sheer-luck (or great-hiring) we had a markets guy as Treasury Secretary.  Many argue Hank was the right guy, at the right place, at the right time.

Hank's burden was that he had to convince Congress to pass a deeply-unpopular bailout package.  To say this was a tough-sell was an understatement.  A bailout was political suicide for the very politicians he needed to convince.  Hank knew some of the bankers getting bailed out were irresponsible idiots...they were his former lunch-buddies after all.  Hank also understood what was at stake for the average American if he failed.  He realized the quagmire he was in.

Hank traveled to Congress, got down on one knee, and literally begged Speaker Nancy Pelosi to not torpedo his bailout package.  She assured him her team wouldn't.  The visual image of this business-Goliath begging at the feet of the Speaker is Wall Street legend.

Next up were the Republicans.  An equally hard sell for Hank. 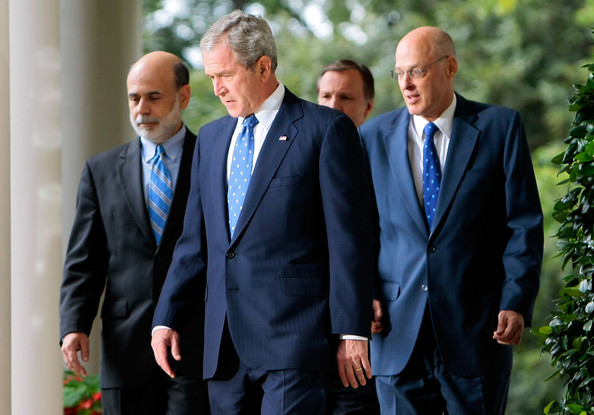 Hank's boss, President Bush, understood what was happening.  The President wasn't the holdup; Congressional Republicans were.  The two crafted a plan.

The President asked two men to join him for a meeting at the White House: Senators John McCain and Barack Obama.  You might remember those two weren't exactly buddies at the time.  Hank & the President knew one of these two men would inherit this mess and needed their help.

"Guys, this sucker could go down" Bush reportedly said to McCain and Obama (can't you hear that Texas accent?).  Hank knew if he could get McCain on-board most of the Republicans would follow; it was an election year of course.  Whatever Hank said to the Presidential Candidates apparently worked.

For Senator Obama it wasn't too difficult of a sell.  A chief critique at the time was he was an inexperienced junior Senator compared to McCain.  Hank's offer gave him an opportunity to look Presidential and demonstrate leadership ability.

For Senator McCain it was a tougher proposition.  With the right-wing "Tea Party" movement brewing beneath his feet he understood how deeply unpopular a bailout would look.  The package was antithetical to the conservative principles of free-markets and small-government.  Despite all of that John McCain was first-and-foremost a Navy man.  Navy men know sometimes it's "all hands on deck" even if you don't want to go.  McCain got his colleagues on-board despite it probably ending his campaign for President.  The rest is history.

Against the odds Hank & the President were able to forge a deal larger than anything seen in American History.

Why do I bring this story up?  Nancy Pelosi & Mitch McConnell vividly remember the mistakes they made during the last recession.  Both of them were key actors in the drama.  This time in the face of COVID-19 the CARES act was passed and stimulus hit bank accounts within weeks.  In Congress-time this is absolute warp-speed.

I think investors are seeing this time government isn't playing around.  Despite the theatre of politics Congress learned from past mistakes.  The country may not be perfect but we do adapt and get better over time.

Here's Hank on what he felt he could've done differently: